My nephew did not celebrate his 17th birthday. Celebration is optional :) so I ended up going with him, his girlfriend and his mother to the Apenheul and had a good time.

The Apenheul is a zoo for monkeys. Its origins are in the sixties and in providing a safe haven for monkeys. There were many experiments and the most relevant one is in the succesful breeding. The black capped squirel monkey had some 30+ young and there were three young gorillas to name but two species. 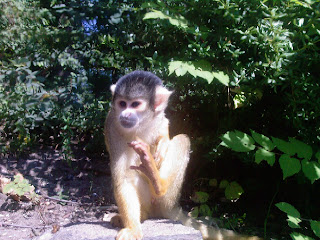 I have been to the Apenheul before and the most amazing thing was the interaction between people and animals. Monkeys used to be all over you but this time, they kept their distance. They have been trained to keep their distance; the stick is a little water pistol. It is good because now I could watch a much more natural behaviour.

In a similar way as I know it of museums, you are informed about the animals, their behaviour, how they maintain a healthy breeding stock. The value of social and mature animals.

There are some people who dislike the notion of the GLAM because they argue it is about "cultural institutions" others say "cultural heritage institutions". I can sympathise with their notions however the success of the GLAM is that it is much more to the point. You do not include churches, or historical societies or even zoos in this. All of them have their value and may even be organisations we could partner with. The notion of the GLAM is sweet to me because as a group they have so many commanalities and as a group they are natural partners to the projects of the Wikimedia Foundation.

I think that the "other" cultural institutions are of most interest to us where they have things in common with galleries, libraries, archices and museums.
Thanks,
GerardM
Posted by GerardM at 12:24 pm