It has been wonderful to see the enthusiasm in Wikidata. It is wonderful to notice how Wikidata is developing rapidly. It is interesting to look at what it does and, how it compares to the first, the original Wikidata project, OmegaWiki.

The short answer is, that there are three main differences;

Wikidata starts with the existence of Wikipedia article(s). Each one of those represents a concept. Berlin (Germany) is an example and  Berlin (Connecticut) is another. In OmegaWiki they would both be known as Berlin while in Wikidata they may both have an additional label for the English language with "Berlin" as its content.

This difference or perspective gives Wikidata an immediate application; it will replace the "interwiki links" for Wikipedia. One important benefit will be that there will be only one instance where these links are maintained. In the case of Berlin (Germany) a new article about this city will not see an update in 205 other Wikipedias. 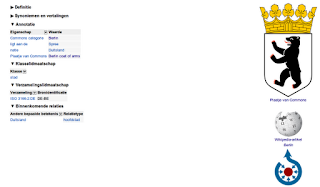 Both Wikidata and OmegaWiki are able to present details on Berlin. All the details at OmegaWiki have been added by hand. Most of the details Wikidata will know are likely to be harvested from info boxes or from DBpedia. What will also make a deciding difference is that the community interested in the Wikidata content will be huge.

So OmegaWiki is more mature... in practical terms it means that it started a long time ago and is now a bit dated. The Wikidata folks know OmegaWiki, they benefited from the experience and while they do not include all the data OmegaWiki has, there is nothing stopping them at a later date.

Many people at the Berlin hackathon are keenly aware of the disturbing potential of Wikidata; no more need for the pywikipedia interwiki bot. Information in info boxes change without a trace in the local project. But they also see the possibility of providing information in a language where its Wikipedia does not have an article... information with an infobox..

It is the support of the Wikimedia Foundation and more importantly its communities that will make Wikidata a success. This is a good thing because the inclusion of structured data in Wikipedia will prove a big improvement in data quality and accuracy.
Thanks,
GerardM
Posted by GerardM at 9:46 am