Writing in more than one #Wikipedia 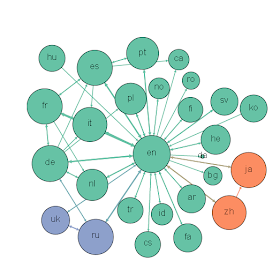 A small minority of editors write in multiple Wikipedias. Research was done if they write on similar subjects and, they do. The paper suggests that they may serve an important function in diffusing information across different language editions of the project, and prior work has suggested this could reduce the level of self-focus bias in each edition.

The paper is interesting but this conclusion deserves a healthy dose of cold water. In order to reduce a self focus, you have to look at the numbers involved. English, contains only 51% of the articles in the second-largest edition, German. English has 4,402,073 articles and German 1.662.589.

In order to have a noticeable impact on either the German or English Wikipedia many articles need to be affected and the number of multi lingual editors is too small for that. This research concentrates on the top 46 language editions and the effect of writing in multiple Wikipedias is probably more pronounced in the smaller language editions. There are indications that acceptance of contributions on the English Wikipedia is particularly problematic for foreign writers. This has people write only in their own language or give up.

Interesting is that Wikidata has been used as a tool. "Wikidata avoids some previous issues with out-of-date or conflicting interlanguage links. Further study of the impact of the Wikidata project on Wikipedia and its editors is not within the scope of this paper, but would be a fruitful area for future research".

As people start to appreciate Wikidata for its capabilities, Wikidata will become used for so many applications among them searching for images, finding articles in another language, visualisation of information, populating infoboxes. More relevant in the context of the topic of this research, it will open up the information that does not have an article yet because what is called the "self focus".
Thanks,
GerardM
GerardM at 10:29 am
Share