Science and Africa - what colloboration exists and how do we know? 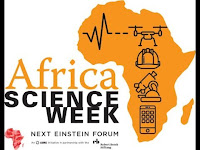 As I am adding large amount of African scientists to Wikidata, I find that I have moved into a green field. A green field as far as Wikipedia and Wikidata are concerned.

To learn about how the information about African science evolves in Wikidata, I created Listeria lists that inform about universities by country, fellows/member of academies of science and members of African young science organisations.

What I produce is a scaffolding; basic information that enables. The information that I use from the Royal Society of South Africa for its fellows includes dates, other awards, employers and even dates of death. Slowly but surely more information is being added for these people and consequently you will also find for, for instance Rhodes University, more employees and additional papers (currently only 1385 papers for its 84 scholars are known).

A scholar like Tebello Nyokong, a Rhodes scholar, has 637 papers to her name. She is a world class scientist and has four Wikipedia articles to her name. All kinds of questions may be queried for her co-authors; the gender distribution, the organisations they represent, the nationality of the co-authors.

Adding one scientist at a time does not make much of a difference. When scientists are added as part of a SourceMD process, any and all scientists who have a public ORCiD profile are likely to get included in Wikidata. This is why so many African scientist are already known. When a notable scientist is then recognised as a recipient of an award, we may already know about the papers they authored.

The SourceMD process is no longer available. It coincides with a lack of resources at Wikidata so any and all resources used for science papers are now available to something else. Understandable, but the result is that I am no longer motivated to seek ORCiD identifiers and consequently, the process is increasingly broken.
Thanks,
GerardM
Posted by GerardM at 6:35 pm 1 comment: 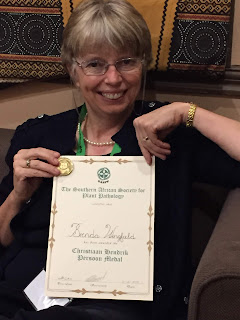 Professor Brenda D. Wingfield is another scientist who won an award Wikidata knew nothing about. This time the Christiaan Hendrik Persoon Medal. The Wikidata basics for an award are its name, the conferring organisation and a website with details. A bonus is when there is a link to a person, an organisation the award is named after..

The Persoon Medal is a South African award, its conferring org is new to Wikidata as well. In an article about Prof B.D. Wingfield, all the other recipients are named as well; there are only six in a time span of 53 years so it was not hard to add them all.

The objective is to make connections. For both the award and Prof Wingfield, connections shows best in a Scholia. One of the more frequent co-authors is a Michael J. Wingfield.. He is a co-recipient of the Persoon Medal, a co-member of the Member of the Academy of Science of South Africa and, a duplicate of Mike Wingfield and yes, he is the spouse of Prof B.D. Wingfield as well. He is at this time Q73879566 in the Scholia waiting for papers to be attributed to the earlier item.

Another frequent co-author, Bernard Slippers, is known from a different context. He is both a member of the South African Young Academy of Science and the Global Young Academy. Given some personal connections it was easy to ask if by chance Prof Wingfield is his doctoral advisor (he is the primary, they both are).

The point of scaffolding is that it provides the structures that enable finding the data, preferably in a context. Given that most data is static, the static representation that is Listeria is really powerful. When you group them like I did for African science or Young Academies, you get the satisfaction of understanding what work is done/has been done on a subject. The icing on the cake is when you enable collaboration. I am grateful for Robert Lepenies to pick up the lead and inform other young academies for what Wikidata may mean for them. I am grateful for Daniel Mietchen for improving on the queries I use; they now show the number of publications known for each scientists and a link to the tool that enables attribution to that scientists.

My role is a simple one. I add data. Data that connects, gives relevance but most importantly data that may be picked up in queries, lists by others. The scaffolds are made by others, relevance only happens when others pick it up. My point: there has to be something to pick up.
Thanks and happy new year,
GerardM
Posted by GerardM at 8:09 am No comments: