Herbivory and fire. Automate citations to display them in @WDscholia 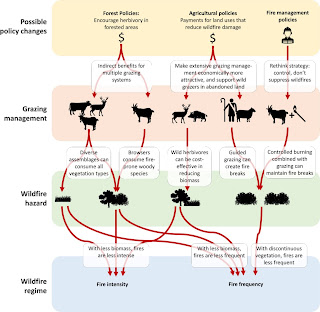 When what is there does not easily burn, a fire will be not that damaging. In a forest, a prairie particularly those with wild grazers and browsers, the damage by a wild fire is substantially less. Science describes this effect and science describes the effect of beavers who have a similar beneficial effect.

For the paper "Effects of large herbivores on fire regimes and wildfire mitigation" Wikidata has an item, it links to its eight authors but there are no citations. Like any quality article there are plenty of references on the website for the article but we do not know them yet in Wikidata. There is a bot that goes around and adds citations in its own sweet time but when volunteers like me take an interest, it would be great to tool up for attention for a single paper.

The benefits are obvious; science connects what is said before to what is said in a paper and eventually it will be linked to those citing a paper. As more papers from more authors get this royal treatment, Scholia as a tool will become even more relevant for those who care about the references in related Wikipedia articles; its references are referenced.

It is easy to suggest that it should not be hard to implement; there is a bot and it only needs to function for only one paper in stead of serially. It then has to find its way as a tool in Scholia and that opens up a box of user interface related issues. Well worth it (I think) but it then we also need to get the message out that Scholia is very much an active as well as a passive tool.