One visitor at the Amsterdam hackathon was Stephen E Slevinski Jr. He was a man with a mission. His mission was to get American Sign Language on the Incubator. As you can see in the picture below, he succeeded in his mission.

Several members of the language committee knew that it was possible for Stephen to succeed. We also knew that when this hurdle was taken, any and all sign languages can ask for their own Wikipedia. There have been requests for languages like Danish sign language in the past as well.

Now that we have the technical ability to show a sign language, the old reason not to express "eligibility" for these languages has gone. Any and all sign languages that have an ISO-639-3 code will find that there is nothing that will prevent them to work towards a Wikipedia or any other project in their language. 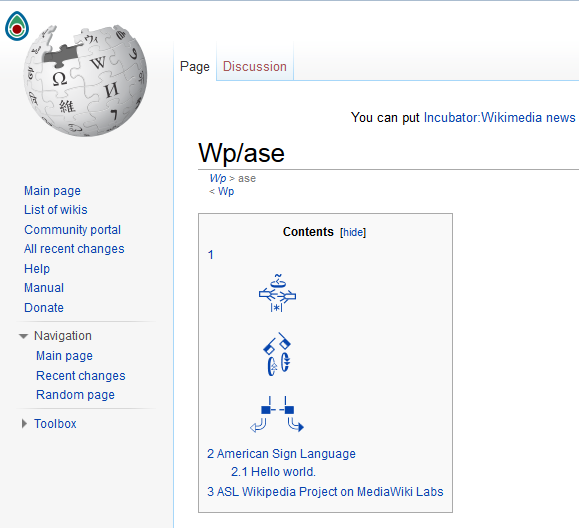 I want to thank a few people. First all the people at the Amsterdam Hackathon who helped Stephen make this dream come true. Secondly, I want to thank Stephen, Valerie and all the other people at the SignWriting Foundation for their continued belief that their languages and their culture deserve their own  Wikipedias.
Thanks,
GerardM
Posted by GerardM at 6:37 pm