#MissingBassel - #Wikidata as a tool 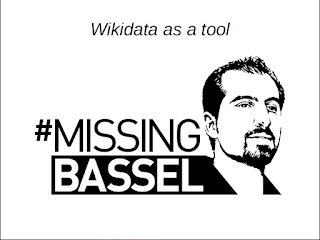 We fear for the life of our fellow Wikipedian Bassel Khartabil. Rumour has it that he has been sentenced to death in Syria. We would dearly love to know that he is save and we hope for his release.

Some people say that we should not get involved in the case of Bassel because we are .. then they fail to convince me because for me Bassel is not political, he is one of us. Some Wikipedians talk endlessly about what Wikipedia stands for and how important our NPOV is. They however fail to grasp how much Wikimedia fails Syria. Only 732 Syrian citizens are known to Wikidata. Arguably we do not inform about Syria at all particularly not because even Caracalla is seen as a Syrian. As Wikipedia fails to properly inform about Syria, is it that we fail Bassel because he is from Syria as well?
Thanks,
GerardM
Posted by GerardM at 8:38 am