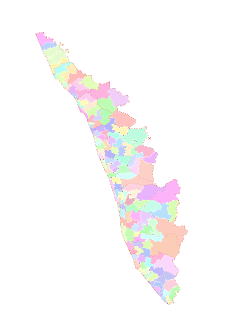 Kerala is one of the states of India and like all the others has its own legislative assembly. Like in Great Britain politicians are elected from constituencies. There are many as you can see on the map.

There are even representatives who are known to have an article on the English Wikipedia but do not (yet) have an item. This is all because of this big push to write articles on Indian representatives.

As more work is done for this big push to get the data complete, the data will become more informative. What we hope to achieve is:

Obviously there is more that might be done. We could add the dates when people became a MLA. This will allow us to create queries that shows who was a MLA at what time. When all this is done for Kerala, there are 28 other Indian states and there are many other countries that could do with a little bit of TLC.
Thanks,
GerardM
Posted by GerardM at 12:48 pm