#Wikipedia - Why the deletion of a George Polk Award winner? 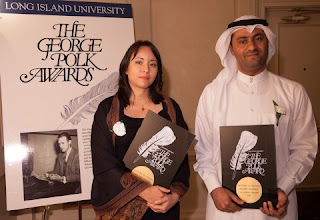 There used to be an article for May Ying Welsh. She received the George Polk Award in 2011, wrote a script for a film she directed Bahrain: Shouting in the Dark, a film that was well received.

The article is gone. But it is not because there was no notability. May Ying Welsh remains notable at Wikidata because she won the Polk award, wrote and directed a movie.. Structural need is why many people are added.

I could ask to see what the article looked like. But what is the point? My point is that Wikipedia fails itself and its audience because of a self imposed lack of information. A message that is not allowed to be raised on the Wikimedia mailing list.
Thanks,
GerardM
Posted by GerardM at 8:45 am