Why didn’t @Wikidata have an item on Margaret Nakakeeto, a champion for living babies? 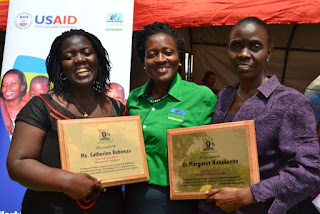 Ed Erhard wrote famously in 2018 "Why didn’t Wikipedia have an article on Donna Strickland, winner of a Nobel Prize?" A year later we can say that it is extremely likely that a Donna Strickland, a Margaret Nakakeeto are known in Wikidata if only because they are a co-author of a paper (technically: an "author string").

When you consider Africa and particularly science in Africa, the subjects that matter in Africa most are reflected in for instance the Scholia for the members of the South African Academy of Science. As far as I now know, its gender ratio is 27% and this is a list with a mix of Wikipedia articles and Wikidata items. It shows the attention African science gets in Wikipedia nicely.

In Africa there is a huge amount of attention for maternal and neonatal care (eg Uganda) and as programs impact the health and survival of women, it follows that more women will become notable, notable for Wikipedia.

By giving attention to female African scientists, the subjects they are known for gain relevance. Their Scholias are developed, including links to co-authors and papers. It will improve the likelihood that when African science awards are announced, we will at least know the recipients in Wikidata.
Thanks,
GerardM
Posted by GerardM at 10:26 am