#Wikidata - Mian Ghulam Jilani, who is he? 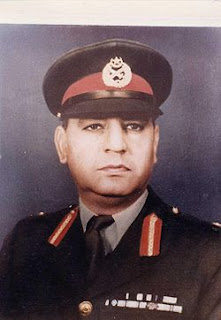 According to a Wikidata description Mr Jilani is a "British Indian general". The highest rank he achieved in the British Indian army was actually lieutenant, he did become a major general but that was in the Pakistani army.

Mr Jilani was also a Pakistani politician. He was a prisoner of war during the second world war and tortured by the Japanese and a prisoner of conscience according to Amnesty International. He escaped prison and died in the USA.

Mr Jilani was never an Indian citizen in fact he fought against India in several battles and was decorated several times. He served as a diplomat for Pakistan in the USA, became a politician, became on outspoken critic of the Pakistani prime minister Zulfikar Ali Bhutto, was imprisoned, escaped to the USA and died as a refugee in Fairfax, Virginia.

In conclusion, Mr Jiliani was never British, Indian nor a general for either country. The automated description has him as: Indian-pakistani politician, military personnel, and diplomat (1913–2004); Legion of Merit, Imtiazi Sanad, and Sitara-e-Quaid-i-Azam ♂. This is not perfect but much better.
Posted by GerardM at 8:59 am