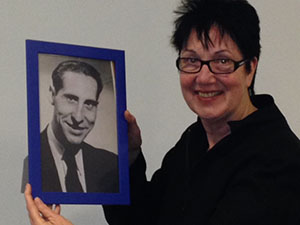 Two years ago I blogged about the J.B. Broekszprize and the VARA. It mentioned a Mr Hof and the fact that it is assumed that this Mr Hof received the award in 1995.

Mrs Spigt was awarded the prize for a radio series about Mary Zeldenrust-Noordanus according to the Dutch Wikipedia article. She is the only one for whom it was not known in what year she received the award.

The best way of finding out? I asked her. Mr Spigt is on Facebook. It is an effective way of digging up some facts.

I always illustrate a blogpost so I googled for images and found this image of Mrs Spigt with her father. Another fact established. I did ask Mrs Spigt if she wanted additional information in Wikidata. A picture is welcome for instance. When you do ask, you may get confirmation about facts. Maybe not sourced in the Wikipedia way but nevertheless correct.
Thanks,
GerardM
Posted by GerardM at 7:43 am