#Wikimedia - Perfection is the enemy of the good 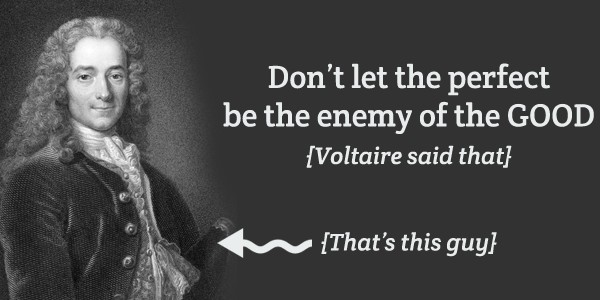 There are several approaches to such criticism. It is true, obviously. I made the point that Mr Anthony received awards to do with psychiatry; he is very important in this field and deserves at least some of our attention. Mr Anthony received indeed the President's award. It is awarded to only five people a year.. It makes him notable in the biggers scale of things. It could be a reason for Wikipedians to take note of him and the other people who were celebrated in this way.

I am proud that I make mistakes; it proves at least that I do something. I think that this is a worthwhile thought. When what is done is not perfect in the eyes of others, so be it. It is all too easy to find fault. When many people make an attempt to do good, it is wonderful. It is how Wikipedia became what it is. It is not perfect and by finding fault at what others do, attention is diverted from what makes a project good, even better.

The aim of the Wikimedia foundation is "to share in the sum of all knowledge". Arguably our projects serve what all our editors put in there. Arguably Mr Voltaire already knew that perfection is the enemy of the good. My sense is that the arguments around the Wikimedia Foundation, its software, its communities have lost much of its validity. It is a bit like with psychiatry, for many psychiatry is business as usual: rehashing the old arguments, iterating on the method of operandi and applying the same stigmas. It takes people like Mr Anthony to bring hope, to tell people that there is room for recovery, that it is important to (re)connect to the values that are important.

There is hope for Wikimedia and it is not in rehashing time and again what went wrong. It is in what went right and what it takes to make it go right again and again. It is in reconnecting to important values like "be bold" and in recognising the work people do.
Thanks,
GerardM
Posted by GerardM at 9:49 am