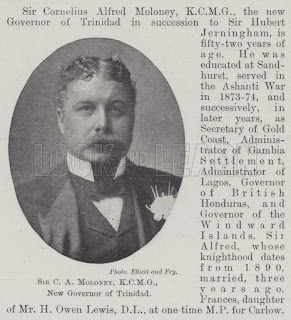 Mr Moloney was one of the Governors-in-Chief of the Windward Islands.  As a colonial administrator for the British his tours of duty included work in Africa and in South America.

As part of his endeavours, he had an interest in forestry and even wrote a book about it. This resulted in him being known in the IPNI database of authors. All of these authors had been added so it was just a matter of merging the two items for Mr Moloney.

When you read the article on Mr Moloney, it does not mention his publication but it does mention that during his tenure at the Windward Islands there were riots because of the cost of water.

Every historic event does not happen in a vacuum. Pertinent information becomes more and more available and this can be provided either in Wikipedia or in Wikidata.  For the Windward Islands it would be that it is a "British Colony" with as its Governor in Chief Mr Molloney and possibly a map to make it clear what is included.

One problem with understanding many facts is that they are better understood when a context is known. As we gain more data it becomes feasible to provide it.
Thanks,
GerardM
Posted by GerardM at 10:37 am