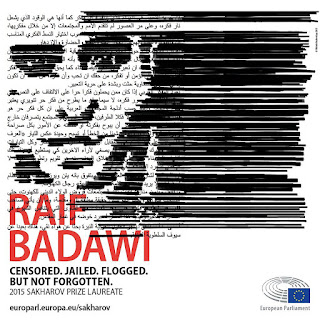 It is not the first time that this blog features Raif Badawi. Ín 2015 he was awarded the Sakharov Prize and as the poster has it "CENSORED. JAILED. FLOGGED. BUT NOT FORGOTTEN."

He is not forgotten. In 2017 he received the Monismanien Prize. Raif was a blogger, what he had to say got him into trouble. Amnesty International recognises him as a prisoner of conscience.

It is important to register the recognition given to a few. They represent so many more people who are equally deserving. As we recognise awards, we recognise people and associate them with people that have been recognised in a similar way. It does not matter what for; it is how it works.

When recognition is given, it means something. Raif is recognised as a blogger.. others are reporters, doctors or Wikimedians.
Thanks,
GerardM
Posted by GerardM at 4:57 pm