The Tai Le script is a script used for the Tai Nüa language. The Wikipedia article is a bare boned article and it could do with some expansion. 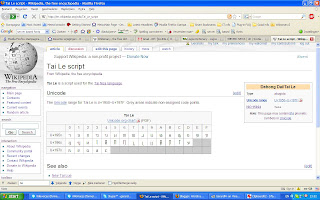 To show what this script looks like, the characters are shown when the user has the appropriate fonts loaded on his machine. Many people do not have sufficient fonts on their machine. 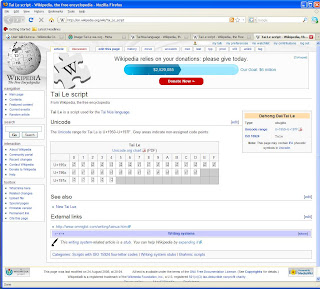 There are solutions to this problem; the first is have people load fonts for all languages. This is quite complicated; the font that I use for the Khmer script for instance does not show in Google Chrome. One strategy that would help for Wikipedia would be for the Wikimedia Foundation to actively support fonts for the scripts it uses in its projects.. that is all of them.. and provide them as a downloadable resource.

Another possibility is to provide server side fonts. In this way fonts are loaded from WMF servers when the user does not have the appropriate fonts on his system. I have done some reading on the subject, it is doable but the providers of fonts are absolutely against this because people do not need to buy the fonts any more. Given that the WMF is about Open Source and given that many fonts are available under a free license, this is not an issue for the WMF.
Thanks,
GerardM
Posted by GerardM at 11:42 pm