#Wikidata - The dead at the #Arabic #Wikipedia 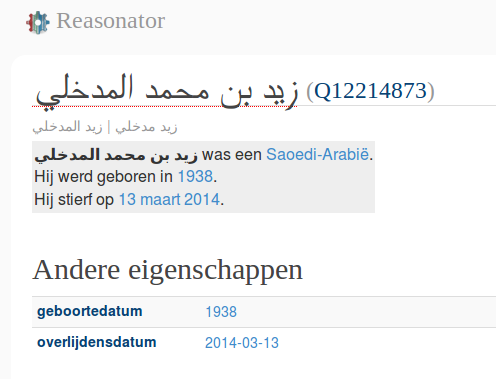 As the #quality of Wikidata can be measured, it is important to be inclusive when what is measured are the people who died in 2014. People die in every country like this gentleman from Saudi Arabia.

According to the article, he died Thursday, 12 May 1435 AH, that is the same as 13 March 2014. Google translate transliterates the title as "Zaid bin Mohammed portal". That is enough reason not to use the transliteration as the title for the item.

When you read the article it is about Mr bin Mohammed and does not give the impression of a portal page.. That is for someone who understands the Arabic Wikipedia to fix.
Thanks,
GerardM
Posted by GerardM at 7:13 am