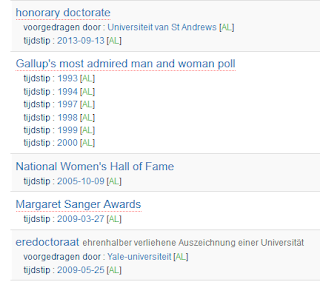 Mrs Clinton has been the recipient of many awards. The current count at Wikidata is at 23 and, it is quite an impressive list.

There is one funny bit in there, you have to know Dutch to spot this loonie. Mrs Clinton has been awarded several honorary doctorates. The screen shot shows nicely that there are two items for the same thing. You may see one for the University of St Andrews and one for Yale University.

Obviously the two could be merged. One reason why I won't is because Reasonator does not show redirects nicely and I do not want to lose all that information.
Thanks,
GerardM
Posted by GerardM at 8:40 am