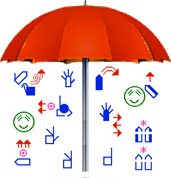 Thanks to SignWriting, sign languages can move on from only having an "oral tradition". I have been privileged to witness as the SignWriting community moves slowly but surely ahead in gaining recognition by making their languages and their cultures equal to any other language in the age of Internet.

Knowing Valerie is an inspiration. She is a real mover and shaker for so many people. I rate her as highly as Jimmy Wales. Anyway, these are the questions I put to her. Enjoy!
Thanks,
GerardM

How do you explain what it means when a language cannot be written?

If I understand it correctly, most of the world's languages do not have a written form. All languages CAN be written. But most languages are not written.

But it takes effort by people who know their languages to want to develop a way to write it and lots of languages, for example, in Africa and Asia, may not have the political position, nor the funds, to invest in the development.

How many languages are written in the SignWriting Script?

That is also hard to say, but we estimate that small groups of people are writing their sign languages in around 40 countries…based on real written literature and also by word of mouth…we have definite proof for many, and some proof for some…. Some sign languages have 100s if not 1000s of written documents - ASL and DGS are two examples

Can you recognise what sign language it is from a written text?

Yes, between written ASL and written DGS (German Sign Language) we can definitely see a difference immediately - Other sign languages, not so much yet, because we do not have that much experience comparing written documents - as each sign language has more and more literature, it will be easier to recognize differences in the sign language literature - a lot has to do with the choice of style of writing… German Sign Language is written with more mouth movements than our ASL written documents… so one can see which language it is quickly

What are the most active sign languages (that are writing with SignWriting)? 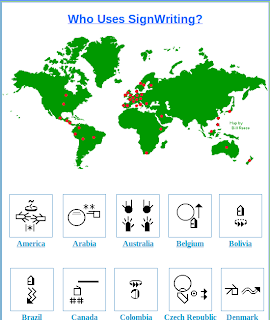 
The use of SignWriting is growing rapidly. How do you know about how it develops?

Are there many schools where they teach SignWriting


SignWriting is spread freely on the internet, so lots of people learn SignWriting on their computers, but there are schools with official courses too, such as 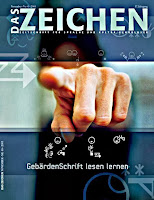 How hard would it be to have the pupils at these schools write two articles a month ... How many Wikipedias could be started that way…


Just as soon as Steve Slevinski and Yair Rand are ready for us to move Nancy Romero's 37 articles, and Adam's 2 articles and Charles Butler's 1 article, from the Wikimedia Labs to the Incubator, and we have tested the ASL User Interface, and we have tested the new features like linking and selecting text, and when Steve has completed the new SignWriting Editor program that will make it possible to write articles directly on the Incubator site, then of course we can ask teachers and students to test our new software and start writing articles… our software isn't ready yet though.

That is why Nancy Romero, our most prolific English-to-ASL translator and SignWriter, is writing enough articles to lay a foundation so we can get started - we could ask students to write the articles over in SignPuddle Online, and then we can move those articles over to the Incubator for them - but until the Editor software is completed it wouldn't be as much fun for the students as it will be later - that day is coming and it is an excellent idea for the future.

Why is Wikipedia strategically important for getting more people to know about SignWriting.


I consider it VERY important because it provides us literature for readers to read written in ASL that are not children's stories or religious literature. Ironically we have plenty of children's stories written in ASL, including Cat in the Hat, Goldilocks, Snow White and others…and Nancy Romero has written close to the entire New Testament in ASL based on the New Living Translation, and another Deaf church has also written much of the Bible - but we are really grateful to have articles to read in Wikipedia that are general non-fiction - educational, historical, scientific.

Wikipedias are also important because they will encourage others to write articles in ASL which will indirectly teach people how to write ASL. Another wonderful indirect result will be an added respect from the general public. Surprised visitors will realize that ASL and other sign languages can now be written -