Vo Nguyen Giap, a general and politician from #Vietnam 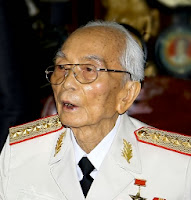 Vo Nguyen Giap died on October 4th. He was probably one of the most successful generals of the twentieth century. He was instrumental in defeating the armies of both France and the United States.

When Mr Giap died, it became international news and as a consequence new articles were written in several Wikipedias. New statements were added for Mr Giap in Wikidata.

The proof of the pudding is also in finding what the Occitan Wikipedia makes of all this information. So I created a new article their as well and added the link in Wikidata to make it work.

I am pleased with the result. To make it look even better, I could add even more information about Mr Giap for instance him having been the minister of defence for Vietnam.
Thanks,
GerardM