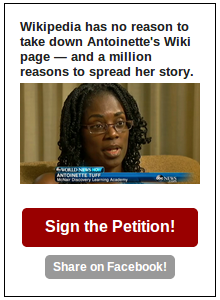 I received an e-mail about Antoinette Tuff. According to some Wikipedians she is not notable enough because as the text says: "nobody died here". What is notable, what made me sit up at the time, is that she prevented another school massacre by reasoning with another armed loon.

When someone can only be considered to be a hero when shots are fired something is so wrong. These values alienate me.

For me this issue has more relevance than PFC Manning deciding what sex (s)he has.
Thanks,
GerardM
Posted by GerardM at 9:39 am