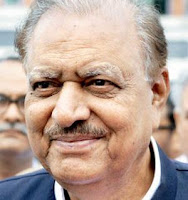 There is a new president of Pakistan and consequently, it is fitting to feature a list with all Pakistan's presidents.

The list was feature worthy for Wikipedia, so I had a look at the presidents at Wikidata.
Maybe the Presidents of Pakistan can become an featured effort for Wikidata when more people give it some tender loving care.
Thanks,
GerardM
Posted by GerardM at 3:58 pm