Pablo Neruda, a #poet and #politician from #Chile 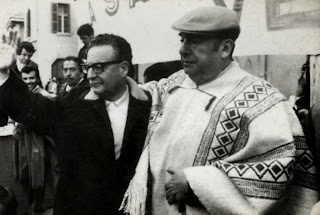 #Wikidata has a new feature; #Commons can now be linked as well as Wikipedia and Wikivoyage. It is a first step in a process that will  get the information that exists about all the 18,599,261 freely usable media files in a more usable format.

The most obvious problem with all those media files is that it is hard to find to find anything. Another is that you have to know English and, it is not possible to easily find all the pictures of famous photographers.

Anyway, I experimented with Pablo Neruda because there was something about him on Facebook today. I added the most relevant link on Commons for him and then I checked out the other information as well. I qualified that his Nobel price was given in 1971. From the article I learned that he was a diplomat and a politician as well as a poet. I added the political party he was a member of.

Someone as multi faceted as Pablo Neruda deserves good coverage on Wikidata. It is known for instance that he had two spouses and at least one child. Currently there is no way to indicate this without the creation of more Wikidata items. They may not be notable in their own right but given their association with Pablo Neruda they may be.. What do you think?
Thanks,
GerardM
Posted by GerardM at 11:06 am