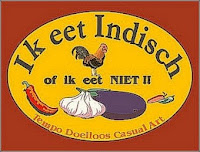 The #Tropenmuseum had a symposium with the title Colonial Nostalgia. The first part of the evening were two introductions of books and the second part started with four highly esoteric introductions to the subject.

As my family had no connections to "de oost", practically Indonesia was for me the Indonesian rice table, the remembrance plaques in the chapel near my school and the statue of Jan Pieterszoon Coen in front of the Westfries Museum.

In the introductions a structure was given to what is it that gets people's interested for times gone by. I did not fit in. The question if there had been signs of "whites only" at Indonesian swimming pools was new to me. It did evoke passions in the public and, one of the speakers was willing to give 100 EURO for proof that such signs actually existed.

My involvement in Indonesia originated in the wish by the Tropenmuseum to share its Indonesian collection with Wikipedia. The realisation of this resulted in the use of its great collection in many languages as illustrations, particularly in Bahasa Indonesia. The people that use the Tropenmuseum collection may write because of a sense of nostalgia, it may also be because they write an encyclopaedia and historic articles ask for historically relevant illustrations.
Thanks,
GerardM
Posted by GerardM at 5:08 pm