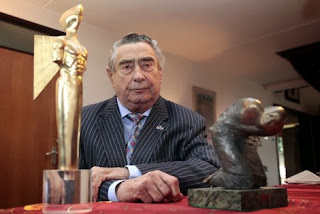 Contrary to popular opinion many subjects that are notable and relevant for people who read English have no article in the English Wikipedia. Winners of the Academy award qualify as having enough notability for an article.

Lajos Kalános won the Academy award in 2003. Wikidata did not have an item on him, there was an article about him on the Dutch Wikipedia.

Wikipedia and Wikidata are not in competition. Far from it. Both offer complementary information. Mr Kalános died October 8th in Naarden.
Thanks,
GerardM
Posted by GerardM at 7:34 pm