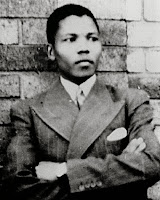 Nelson Mandela was the President of South Africa. Many statements have been made about him on Wikidata in the past. At the Diversity Conference Wikidata was a topic in several conversations. One question was how Wikidata could be leveraged in the many languages of South Africa. In that same conversation the question was asked how can we give people micro-tasks that have a big impact.

I asked the chairman of the South African chapter to add all the labels used on the item for Nelson Mandela in his native language of Tsonga. He did get some instruction but he was left very much to himself to do this. When he had a look at Jacob Zuma, he noticed that because of his earlier work several labels were already available in Tsonga.

What was really clear to him was that adding labels to statements and items are micro-tasks and, that kids can do them. Anyone can do them. Seeing the effects of the work done is really motivating.

As a thank you I wanted to present Nelson Mandela looking good in Tsonga. To do this I had to learn from Magnus how to show the Reasonator in other languages. My choice was to use Chinese as the fall back language. This is just to make obvious that there are still a few labels missing :)
Thanks,
Gerard Meijssen
Posted by GerardM at 11:40 am

Email ThisBlogThis!Share to TwitterShare to FacebookShare to Pinterest
Labels: Diversity conference, how to, South Africa, Wikidata