At the Europeana 2010 conference, participants were given a bag with goodies. A booklet about Amsterdam, a pen, a notepad .. 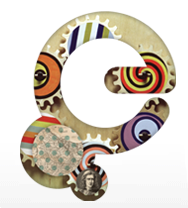 The many variations on the Europeana logo are really nice; they look good and at the conference most people have a laptop. Geeks like me often have an array of stickers on the back of their computer. Stickers were used to indicate directions so it was just a matter of asking if one was available.

I cut the figure out of the white space and now I proudly advertise that I have attended a great conference.
Thanks,
GerardM