Musings of a VC in NYC

When a VC in NYC wonders "Does Rest Of World Matter More Than The US?" it is of such an interest that I was plugged in to these musings. On this blog the following ComScore numbers for February 2010 were mentioned.
The conclusion is:

The traffic numbers for Wikipedia are not different. This is best expressed in the score card graph. 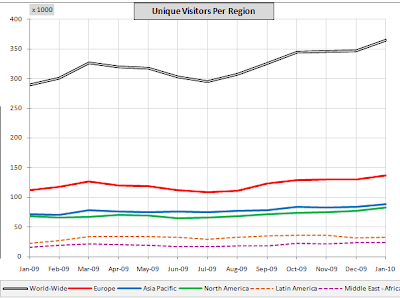 The Google, Facebook, Twitter numbers are considered for their potential of monetisation. For Wikipedia this is not a stated objective. With Wikipedia the aim is to bring knowledge to every human being. This graph shows where these people are. This graph provides an argument where the Wikimedia Foundation should invest to maximise its return on investmentment.
Thanks,
GerardM
Posted by GerardM at 11:15 pm